Reliance Jio has been on the news all around with the upcoming 4G VoLTE feature phone which was said to cost just Rs. 500. Few sources have got their hands-on the device and have revealed the images of the same. The phone will be launched with the brand name LYF which Jio introduced last year. Reports suggest that the phone will support video-calling, an app store and a microSD card. As per the images, the phone looks very simple with a candy-bar design.

The phone is said to sport a 2.4-inch display, a 2-megapixel rear camera and a front-facing VGA camera. Reports also suggest that the phone will come with 512MB of RAM and 4GB of onboard storage which will be further expandable up to 128GB using a microSD card. This is a dual-sim feature phone and will accept only nano sim cards.

The device is also said to include an in-built voice assistant, which is currently present only on smartphones. The voice assistant will support Indian regional languages, and users will be able to ask about the weather and other queries, as per the reports. Jio may also optimise the phone’s software to run the Jio apps and some social apps like Facebook and WhatsApp. The phone is said to pack a 2,000 mAh battery.
As far as the connectivity is concerned, Reliance Jio’s LYF 4G VoLTE feature phone will support Cat 4 LTE Band 3,5, and 40, which will help in running the Jio 4G VoLTE service. The feature phone will also support GPS, Bluetooth 4.1 and USB tethering which will allow you to share the data with your personal computer, laptop or other devices. Previously, rumours suggested that this new feature phone by Jio will cost around Rs. 500, which is now being contradicted by the recent reports. These reports suggest that the Jio’s4G VoLTE feature phone could be priced at Rs. 1500 approximately.

Top 5 reasons not to buy the new JioPhone 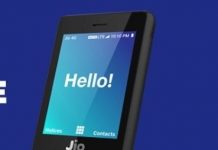 Relaince Jio to launch 4G VoLTE feature phone in its AGM, Here's how to watch it live