Asus has finally launched its ROG Phone 2 in India. This is the company's most powerful smartphone yet. The 8GB+128GB variant is priced at Rs. 37,999 whereas the 12GB+512GB variant will be available for Rs. 59,999. It will be made available exclusively on Flipkart starting September 30.

Launch offers include 10 per cent instant discount on Axis Bank Credit and Debit Cards and ICICI Credit cards. Also, buyers can enjoy no-cost EMI for up to 6 months.

Asus ROG Phone 2 sports a 6.59-inch full HD+ AMOLED display with a resolution of 2340x1080 pixels. It has a refresh rate of 120Hz, a response time of 1ms and support for 10-bit HDR. The display also has a 240Hz touch sampling rate and a touch latency of 49ms. It is protected by Gorilla Glass 6.

The device is powered by Qualcomm's latest Snapdragon 855+ processor, which has been clocked at 2.9GHz. It is paired with an Adreno 640 GPU. The device comes with up to 12GB of LPDDR4X RAM and up to 512GB of UFS 3.0 storage.

The device runs Google's Android 9.0 Pie operating system with the company's own ROG UI on top. Users are also being given an option to switch to stock Android if they want to do so.

All of this is backed by a massive 6,000mAh battery, which is also the largest battery any major smartphone manufacturer has provided in their flagship smartphone. The phone also comes with support for Qualcomm's Quick Charge 4.0 fast charging technology.

Coming to the camera department, the Asus ROG Phone 2 sports a dual-camera setup on the back consisting of a 48MP primary sensor paired with a 13MP wide-angle secondary sensor with a 125-degrees field of view. On the front, it features a 24MP sensor for taking selfies and making video calls. 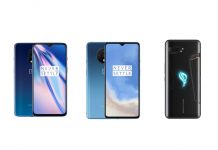