Messaging Giant WhatsApp has finally brought the Picture-in-Picture (PiP) for Android users. The feature was launched in beta back in October and is announced in stable version 2.18.380 of WhatsApp. You can now watch Youtube, Facebook, and Instagram videos while scrolling through the chat normally.

Also, WhatsApp ought this feature to their iOS users back in January. The feature has been delayed a lot for Android that users thought that Android wasn't getting this feature ever.

You don't need to change any settings to enable this feature on the latest version of WhatsApp on Android (2.18.380 and above). Once you are on the said version or above and you receive a Youtube, Facebook, or Instagram video and you click on it, there will be a small dedicated window that opens on the top of your screen playing the video. The window is movable so you can place it wherever you want. This will enable you to chat while watching Youtube Video in the background. This works both in Group Chat and one-on-one chat.

Also, PiP is enabled in devices running Android Oreo and above, so if your device is running Android Nougat 7.x or below, you won't be able to make use of the latest feature by the messaging giant. Also this feature is also not available on the WhatsApp web application.

How to get this feature?

If you aren't able to play videos in Picture in Picture mode, head over to Google Play store and from the side menu select My apps and Games. This will lead you to a page showing you all the updates for all your apps. Update WhatsApp from there. The update should take you to version 2.18.380 or higher. If you haven't received the update, then wait you will get it in a day or two as the roll-out is done in phases. 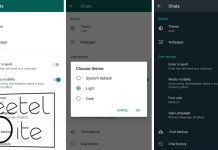